Knowledge
Welcome to our Knowledge Portal.

Two for the Money 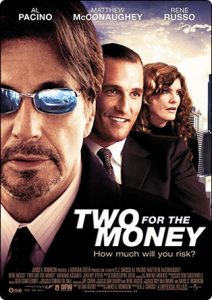 Brandon Lang (Matthew McConaughey) has achieved a successful college football career as quarterback. He injures himself badly during a game, but immediately starts the build-up training. However, he is no longer accepted into the squad by his team or any other American football team, so he has to end his career. Instead, Lang now works as an employee of a switchboard and begins to make recommendations for sports betting. Due to his many years of experience in football and his intuition (attention and intuition management), he achieves an extremely high accuracy of up to 85%, which is why he will soon be recruited by Walter Abrams (Al Pacino). He runs a consulting firm in New York City, which sells tips for sports betting via a free hotline. The call of the customers is free of charge, but they pay a commission of the profit to Abrams. In addition, the entrepreneur married to Toni Morrow (Rene Russo), who has a daughter (Chrislyn Austin), produces his own television program "The Sports Advisors". Abrams creates the fictional person "John Anthony" for Lang. Under this pseudonym he acts vis-à-vis the customer in the brokerage of sports betting. At first Lang becomes more and more successful as "John Anthony". This goes so far that Abram, once a gambling addict, bets and loses a large part of his fortune on one of Lang's tips. However, the more Lang concentrates on acting like Abram's John Anthony, the worse his scoring in sports betting will be. He becomes aware of this, but cannot find his way back to his old accuracy and finally tosses a coin to commit himself to the winning team at the Super Bowl. Surprisingly, this team, which was clearly behind at first, can still win the match with the last move. Although Lang has restructured the company with this tip, he returns home to Las Vegas to work as a football coach for a youth team.